My goodness, my Guinness!

That Guinness that you’re looking forward to this evening (yes, it’s a weekday, but, come on, it’s St Patrick’s Day!) most probably started its life in Dublin, at the black stuff’s famed St James’s Gate brewery, but have you wondered how it made its way from there and to wherever you may be drinking it?

For the last decades, tankers of Guinness have sailed across the Irish Sea on ferries to Liverpool, and onward to a Runcorn plant for canning and bottling. Indeed, this facility – operating 24 hours a day, 7 days a week – packs 300 million litres (almost half of everything brewed at St James’s Gate) per year, and distributes all over the UK and to 130 other markets around the world.

Guinness became shipowners in the early 1900s, and, out of Dublin, operated their own vessels to Liverpool and the Manchester Ship Canal to serve bottling plants in Liverpool (closed in 1986, but was located in what’s now the city’s Baltic Triangle area) and Runcorn. Following a colourful history, which saw some of the ships torpedoed, bombed, and colliding with a bridge, the cargo moved purely onto ferries in the mid-1980s. 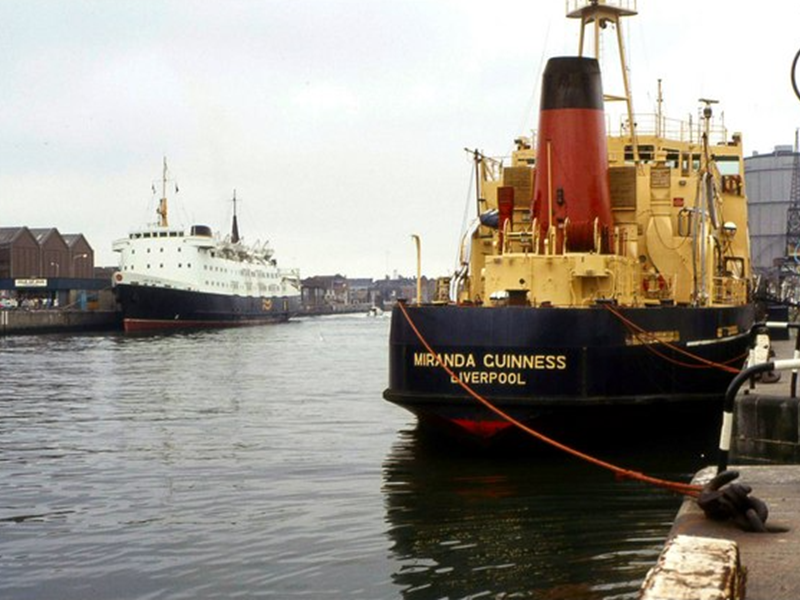 MV Miranda Guinness – the last vessel on the Dublin-Liverpool Guinness route – in Dublin (late 70s/early 80s). She was broken up in 1993.

So, whether you think Good Things Come to Those Who Wait, or Not Everything Black and White Makes Sense, you can thank the shipping lane between the Rivers Liffey and Mersey for ensuring safe passage of this very precious cargo.